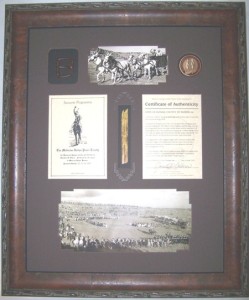 The Medicine Lodge Indian Peace Treaty Association is pleased to announce the release of limited edition historical framed artwork. The association has put together beautifully framed and custom matted pieces of art that are historically significant to the legacy of the Peace Treaty. This edition of art is extremely limited, as there are only 150 pieces of artwork for sale. Each framed art is priced at $150.

The 2011 Peace Treaty Pageant showed record breaking numbers in attendance. More than 11,000 people attended the pageant performances. The new board members of the Peace Treaty Association are already in full swing with planning of the 2015 pageant.

Local Friends of NRA Chairman Deb Kolb visited a Peace Treaty meeting in May of this year. She explained that historically significant artwork has become a very popular trend in fundraising for her organization. Deb suggested this would be a great fundraising idea for the historically based Peace Treaty Association. She pointed out that this type of project has the potential to be ongoing and would provide regular exposure for the association in off years. Deb had gathered details and information regarding this unique approach to preserving Peace Treaty memorabilia. She brought samples of historical artwork from Friends of NRA as well as suggestions for art projects the association could consider for themselves. The association voted to continue with the project; Deb and Peace Treaty Board Member, Joscelyn Nittler, began the search for the artwork contents.

One common feature in the samples of art that Kolb shared was a coin or medallion from the organization sponsoring the artwork. Deb had researched and contacted a reputable, American based minting company. She provided quotes and coin artwork featuring the Peace Treaty statue on a Peace Treaty Association coin. The coins were impressive and the Peace Treaty board agreed to include a one-sided medallion in each frame. The association is excited about the idea to do more with the coins in the future.

Deb and Joscelyn started at the pageant grounds shed, which to them is full of old treasures. Specifically, they were looking for something that could be made into 150 similar pieces, a bigger task than it sounds. Stagecoach driver Jim Colborn produced the twisted stagecoach tongue from the stagecoach wreck of 2003. Later, rummaging through boxes full of photographs and newspaper articles at Nixon Realty, a picture of the stagecoach from the second pageant was located. This discovery provided the focal piece to the artwork. Bill Kolb tackled the chore of cutting down the stagecoach tongue into 150 similar shards of wood, thin enough to be framed. Also featured is a signed and numbered certificate of authenticity certifying the shards of wood.

While at the shed, Jim Colborn told an interesting story of the Barber County farmers switching from working livestock to machinery in the early 1940s. He explained that the farmers donated all of their old harnesses and equipment to the Peace Treaty Association. “Those are all older than 1940,” he said, pointing to a long rack of livestock tack. “These are off of them,” he said, in regards to hundreds of rusty buckles and harness hardware hanging on wire loops from nails. Deb took on the grimy job of sorting through all of the buckles, searching for 150 similarly sized pieces of hardware. They had to be cleaned of loose rust and sealed. Included with each print is a letter from current Peace Treaty Association President Rick Swayden. Rick shares the story of the farmers and explains the significance of the items in the frames.

The current Peace Treaty Association has put together what they consider to be unique and beautiful works of art. The prints contain actual items of Peace Treaty times gone by, giving you a rare opportunity to preserve the legacy of the Peace Treaty and your own piece of Medicine Lodge history. The association anticipates these to be highly collectable to local families. Please don’t wait to purchase yours. There are only 150 available.

Based on the success of the first artwork edition, there is a possibility that local collectors may have future surprises to look forward to!

To place an order, please use the contact form.